Rev. Gene Szarek, C.R., a resident of the Janski House at St. Hedwig Parish since the summer of 1990, is a professor of Theology at Loyola University Chicago.

He was baptized as a baby at St. Hedwig Parish and graduated from St. Stanislaus Bishop & Martyr Elementary School and Weber High School. He entered the Congregation of the Resurrection and professed religious vows in 1959, spent eight years at the seminary in St. Louis, being ordained a priest at the St. Louis Cathedral in 1967.

He holds graduate degrees in philosophy and mathematics (St. Louis University) and theology (University of San Francisco). He earned a Ph.D. in biblical exegesis from Marquette University in 1975. He was religious superior of this house for nine years and served numerous terms as provincial councilor and assistant provincial. He was elected four times to serve as a delegate to the Congregation’s general chapters, held every six years in Rome.

He taught mathematics and religious at Gordon Tech High School (1957-1971), served as pastor of St. Stanislaus Bishop & Martyr Parish (1976-1981) and principal of Archbishop Weber High School (1981-1990). He has been teaching Theology at Loyola University Chicago since 1991 and helping with sacramental ministry as needed at St. Hedwig Parish.

He loves the people of this parish and his students and prays each day for their health and well-being. 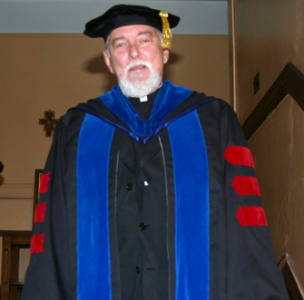